This Land Is Your Land

by Chris Darby and Friends 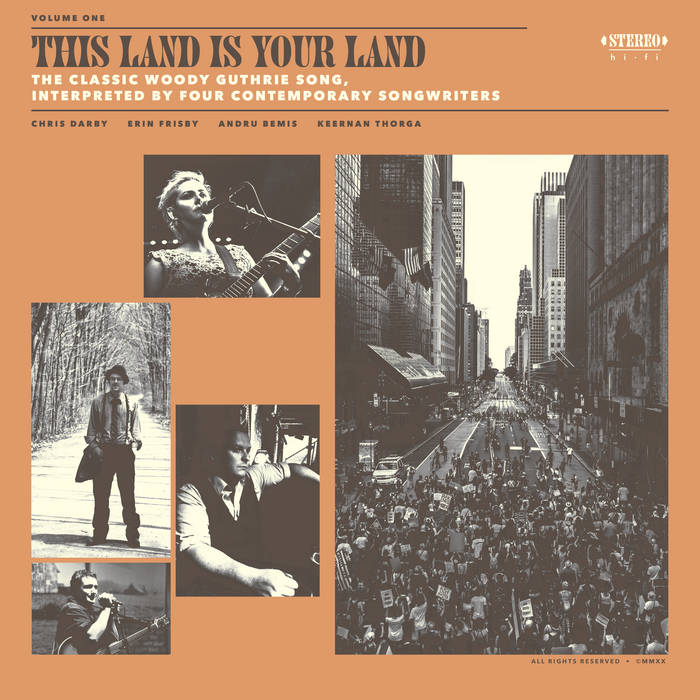 With its powerful message of unity and hope, “This Land is Your Land” is well known throughout the United States, and to me it has always been an anthem for what the promise of this country is. The song embodies the idea that there is space for all people to coexist, independent of their beliefs or immutable characteristics, a relatively new notion in the history of civilized society. While our country has yet to fully realize this idea, it’s a worthy goal as the nation struggles to become “a more perfect union.”

Woody Guthrie wrote the song, not as an anthem, but in response to hearing Kate Smith’s overly-polished “God Bless America” on the radio as he traversed the country. Annoyed that the song glossed over the lopsided distribution of land and wealth, he penned a critical response to it and put the lyrics to an old Carter Family tune. After quickly titling the song “God Blessed America For Me”, he closed his notebook and forgot about it for five years. Luckily Guthrie remembered the song while on shore leave from the Merchant Marines in 1944 and recorded it somewhere in the middle of a marathon 160-song recording session for Asch Recordings. After being published it was quickly covered by several popular musicians and its fame grew to previously unimaginable heights.

I’ve been thinking a lot about the song this year, as the disaster and chaos of 2020 have made it feel and as though society might be spinning out of control. It's difficult to tell whether the 24-hour news cycle or the confluence of chaotic events is the prime driver in overall anxiety and panic, but I’m certain that there is a general sense of unease and distress among almost every person I know. This is something I’ve never witnessed before and it's troubling to imagine the myriad of undesirable outcomes before us.

The good news is that there are very concrete things that we can all do to help move beyond this chaos and restart the process of building our more perfect union, to ensure that this land really is our land.

The first and most pressing step is to vote, using whatever method works for you, on or before November 3rd. If you feel like your representatives aren’t representing you, vote for someone who is. If you can’t find someone who perfectly aligns with your views (you won’t), find out who comes the closest and vote for them. Pay attention to everything on the ballot, not only the Presidential race; research the candidates and measures in as much depth as you can and vote accordingly. Talk to your friends about voting and encourage them to do the same. Every time there is an election, be informed and vote.

Second, realize that voting is only one piece of the puzzle, there’s more you can do. Create art that brings awareness to the issues that are important to you, volunteer with a local organization whose mission you support, organize events yourself if no one else is doing it, protest peacefully to shine light on injustice, and build community in your neighborhood. If you’re stepping out of your comfort zone, you’re doing it right -
nothing improves when we are complacent.

Finally, be respectful, civil and kind, always. This one is especially difficult since we live in a society that teaches us to disrespect one another and to keep our guards up, but it is possible. Sometimes the kindest thing you can do in a difficult situation is to speak up about it, to address others and their experiences with respect and require that they do the same towards you.

If we all keep these aims in mind, our country will become a better and more accepting place. If you believe that this land truly is our land then we can build it to be whatever we want it to be, but that won’t happen by itself. Everyone has to contribute, and it starts with you and me. No single politician can do this work for us, but an educated public that routinely votes in large numbers is key in ensuring that the country stays true to its early vision: a government of the people, by the people, and for the people.

With the help of three musician friends, I’ve recorded my own version of “This Land is Your Land,” presented with all six original verses, three of which remain relatively obscure. I hope you’ll listen and find some comfort in the message.

I’m giving away the recording as a free download, so while you don’t have to pay to enjoy it, I ask that you reflect on the perspective I’ve offered here and take action in your life where you can (namely, cast your ballot).

This land is your land.

This land is your land, this land is my land
From California to the New York island,
From the redwood forest to the Gulf Stream waters;
This land was made for you and me.

As I went walking that ribbon of highway
I saw above me that endless skyway;
I saw below me the golden valley;
This land was made for you and me.

I've roamed and rambled, I followed my footsteps
To the sparkling sands of her diamond deserts;
And all around me a voice was sounding;
This land was made for you and me.

When the sun came shining, where I was strolling,
And the wheat fields waving and the dust clouds rolling,
As the fog was lifting a voice was chanting:
This land was made for you and me.

Saw a great high wall there, that tried to stop me
And on that wall was written "Private Property."
But on the other side it didn't say nothing.
That side was made for you and me.

In the squares of the city, in the shadow of the steeple,
Near the relief office, it's there I've seen my people;
As they stood there hungry, I stood there asking
Is this land made for you and me?

Find out more about the artists here: